On a picture hunt

I mentioned on my other blog that, for my birthday, I was given a beautiful print of one of the artist Kate Lycett's paintings: 'Cloud Inversion'. The writing on the back explains that it was inspired by a winter walk her family took from their home in Hebden Bridge up to Erringden Moor, through the hamlet of Horsehold. These places are just across the valley from my daughter's home but I have never myself walked up that side of the Calder valley. A friend and I decided to go and explore, to see if we could find the view in the painting.

The first part of the walk, up from Hebden Bridge in the valley bottom, is incredibly steep! The terrain then broadens out into a rolling plateau, before a further climb up towards Stoodley Pike, the monument on the hill. We didn't find the exact view in the painting. I don't really think I expected to... The artist's eye has cleverly amalgamated at least three different viewpoints, which I captured in photos.

Firstly, there is the packhorse track up to the hamlet of Horsehold, which must be very old. The track is paved with stone setts, clearly shown in Kate's painting (with some of the setts picked out in gold leaf so that it shimmers) but the track appears to dip down in the painting, whereas in reality it is quite a steady climb.  You can see the old farm buildings in the hamlet, which are also in the painting. I can't find much information about it but I'd guess some of the buildings date back to the early 1800s. 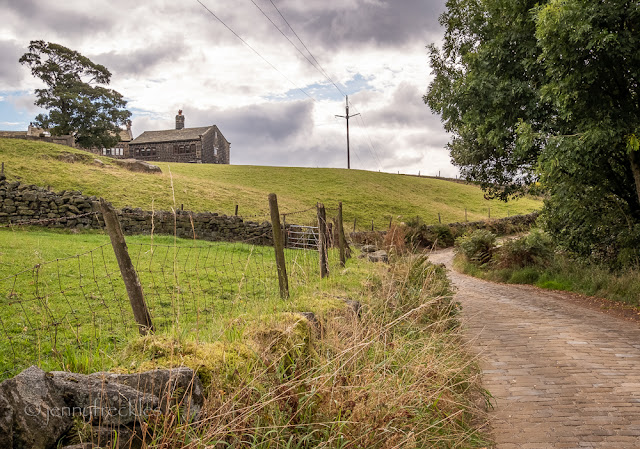 The second image is a five-barred farm gate, which now forms part of a public footpath along the top edge of Horsehold Wood. In the painting it sits at a distance, in a dip, but in reality it is not so far from the road or in quite so pronounced a dip. 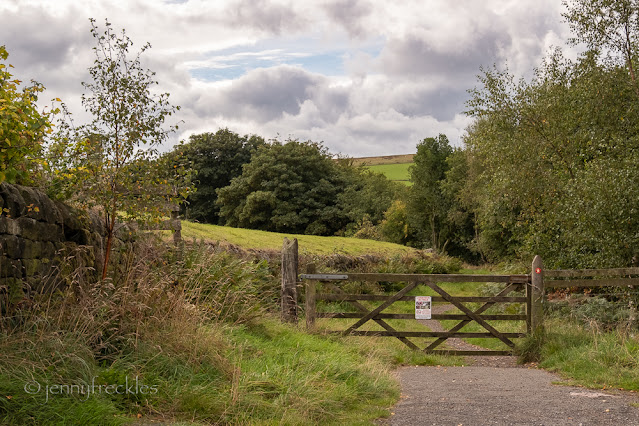 The third view is over the fields to Stoodley Pike but we had to walk up to the hamlet of Horsehold to be able to see the monument (although it may be more visible through the trees in winter).

So, we found that the painting can't quite be encompassed in one 'eyeful' in reality. Nevertheless you can readily identify the scenes that inspired the painting and the artistic composition, with the track leading your eye though to Stoodley Pike itself, makes a more satisfying whole than the reality. It's as though the painting actually sums up the whole walk rather than one static viewpoint - and I really like that artistic interpretation. I guess that's what artists can do, which we photographers can't do in the same way. 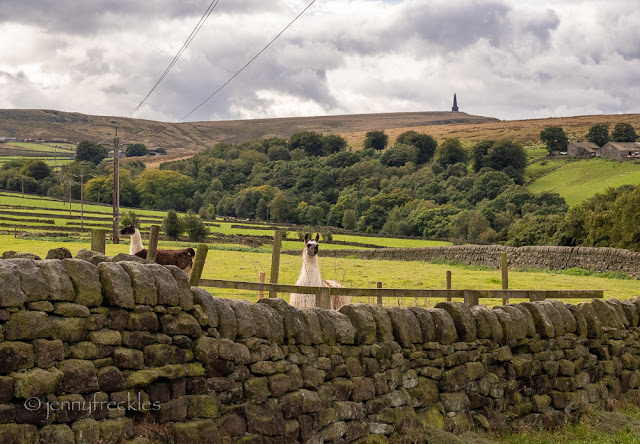 And yes, there were some llamas in the field behind Horsehold Cottages! There is a farm (lots of cattle and sheep around) and some cottages in the hamlet, at least some of which are let out as holiday cottages.