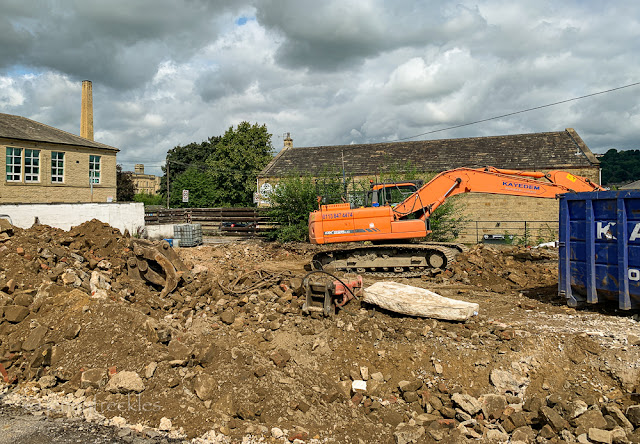 More demolition and digging going on... This time it is quite close to home, on Saltaire Road just next to Wycliffe primary school (which is the building on the left of the photo, with Salts Mill chimney behind it). This site was for many years a garage -  originally, I think, a petrol station before becoming a car repair shop. It therefore has a lot under the concrete and earth - old pipes and petrol storage tanks. (Apparently a mattress too!) The business moved to a new location locally and the site has been largely unoccupied for a year or two. It has, apparently, now been sold and permission granted for a small supermarket. I did read it would be a Tesco Express.  I'm not entirely sure that is progress. It may take business away from the corner shops and small independent businesses in the area. However, I'd better not moan too much. As I enter my dotage (!) it could well be helpful to have a small, reliable supermarket nearby. It will also look better than a deteriorating, vacant lot. And since the road's traffic is bad anyway, I can't see it will have much effect on that.
at 07:00