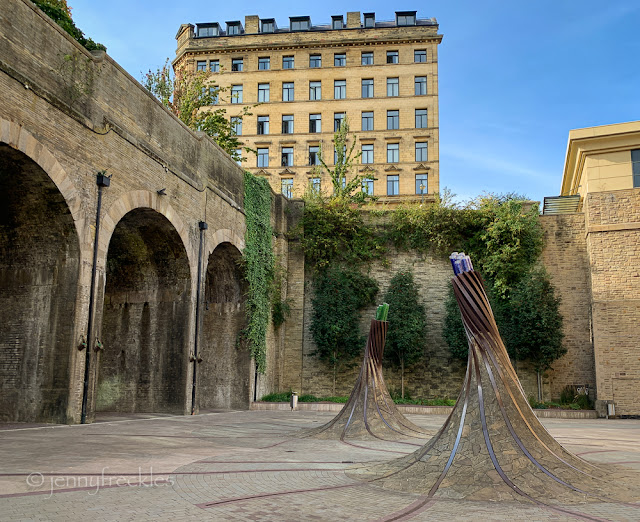 Confusingly, there are two railway stations in Bradford. The one I use from Saltaire is Forster Square - and it's quicker and easier to take the train (about a 15 minute journey) than to take the car and find somewhere to park. It was a beautiful, blue sky day when I made the trip recently to do a bit of shopping.

The area around the station, St Blaise Court, is pedestrianised and the arches that support the road alongside are floodlit with coloured lights at night. (St Blaise was apparently the patron saint of wool-combing.) It has sculptures: Fibres, by the artist Ian Randall, which use old rail lines and coloured fibre optic capsules. I quite like them.

Across the road, there is another sculpture: Connecting the City, by Rick Faulkner. It is like a giant steel needle, which of course references the textile history of Bradford. The fibre optic thread through it lights up at night and symbolises the road and railway connecting people to the city. 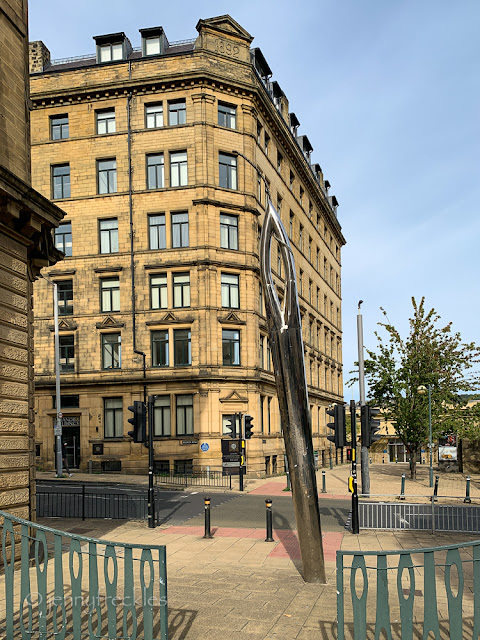 Elsewhere in the town centre, an empty bank building has been used to display large photographs by Carolyn Mendelsohn, a Saltaire-based photographer. These are part of an ongoing and long-standing project to photograph girls aged between ten and twelve, exploring the complex transition between childhood and young adulthood. I've seen several exhibitions of some of these portraits and they are immensely touching (especially for me, being the gran of a similarly aged girl). I'm not entirely sure they translate well to being printed up so big and placed outside but they are nice to see. 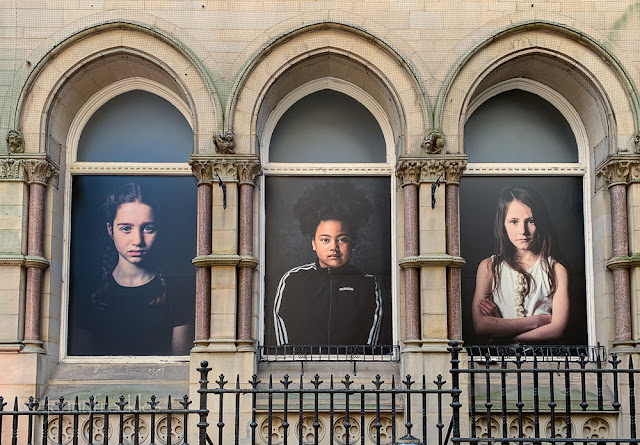 In front of Bradford's City Hall, there's a sculpture that commemorates the Bradford City Fire Disaster, on 11 May 1985. 56 people lost their lives and more than 300 were injured, some horrifically, when fire broke out in the football stadium during a home game. The people of Bradford, me included, will never forget that day. The sculpture is by a German artist, Joachim Reisner, and was presented by our twin town of Hamm to the people of Bradford. By a twist of fate, the sculptor's wife, originally born in Bradford, was actually at the football stadium on the day of the disaster, on a civic visit.  The memorial has on it the name of every person who died. The three bronze figures, in a broken circle that represents the stadium, suggest the divide between life and death and the many rescuers running to offer help - from fire crews to the local residents whose homes surround the football ground; from medics at the hospital to social workers who later were tasked with supporting the traumatised. I find it quite emotional to see. 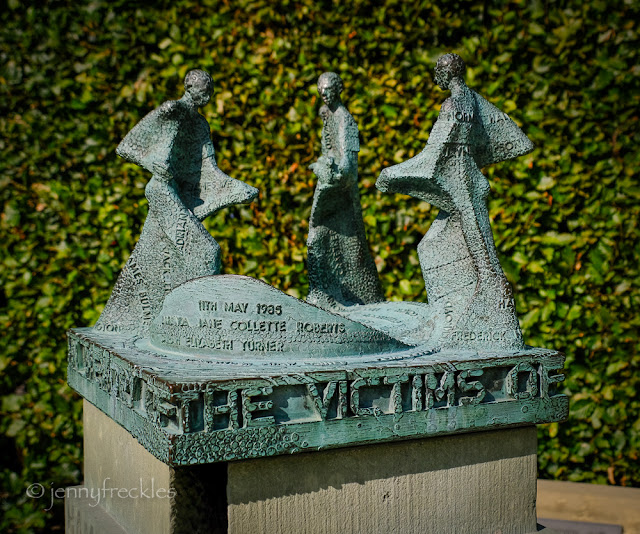